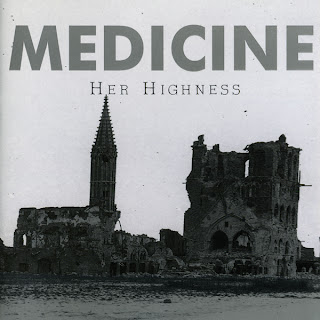 Medicine is at its base a shoegaze band, though, depending on what album you're listening to, an argument could be made for noise pop and/or the all encompassing "alternative rock". Their first album has been described as "noise blur-a-delia layered over confectionery pop songs", while their later stuff is the opposite (pop over noise). Pitchfork described them as "the closest thing to being an American answer to My Bloody Valentine," which, for a shoegaze band, is probably the highest praise possible. Her Highness was their last album before breaking up in 1995 (though they reformed shortly in 2003 and recorded another album), but is nonetheless good as an album. It has been described as "moody, pensive, discordant, ugly, noisy," and having "songs of ambivalence, going through the motions, loves, friends and selves lost, truthtelling and confusion."